I went to the MCM Expo in London today and oh my god I spent more money than planned! I also met Ali Hillis! -glee- She is the voice actress for Lighting (and Liara in Mass Effect among many other games). I have only been to a couple of signings before so I expected us to be pushed through really quickly and just have 1 item signed etc etc but I was there for ages! She hugged me and apologised for the long wait (It took several hours and I had to come back after they took lunch >.< ). I got a photo with her and she signed my copy of XIII and a Lightning card they were giving away. I then asked Courtenay Taylor to sign Jack as I’m a big ME fan too. Ali Hillis was like ‘Ooooh are you? Here have a signed Liara too’ XD They were both fantastic they really were. I so wish I had gone Lightning cosplay because she seemed so interested in the fans and merch. And if only I had taken more Lightning merch with me… Next time I’ll do something fantastic like take my Lightning PS3 or controller! If only I had a Jack lithograph for Courtenay Taylor to sign too. Next time it will happen!

Follow this link to Final Fantasy Merchandise, a forum where I hang with other likeminded people. Another member was also at the Expo and he met Ali Hillis too. He has some more snaps and signings from the day ^.^

Another highlight of the day was that I brought my first Legend of Zelda statue! Photos of this will be up in a blog post soon!

It really was an absolutely fantastic day -glee- 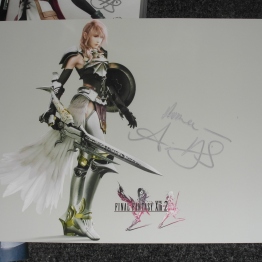